Drought vs. Flood: Which is Worse? 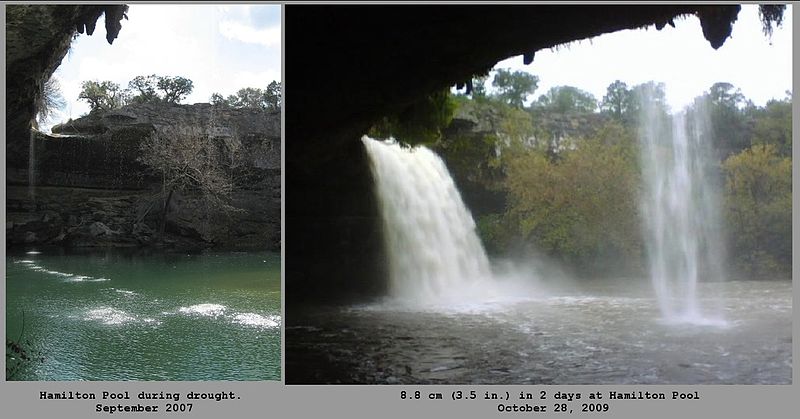 Comparison of drought conditions and flood conditions at Hamilton Pool. Image used under the Creative Commons License via Wikimedia Commons.

In my opinion I think a drought is worse than a flood because if you have a drought you can get water from other places and if you have a flood you can’t get the water out of your city/town.
When towns have bad deforestation it increases the runoff and the water will eventually go faster and it will make more mudslides. The trees would help if it rains a lot because the trees hold precipitation so there would be less water on the ground.
Droughts can cause bad health and it lowers your safety. Some causes of droughts are depression, economic loses, some conflicts where you don’t have enough water, higher chances of stroke, and even loss of human life. Bad droughts can soon lead to tornadoes and hurricanes. Droughts can also lower your food supply and damage their habitats.
There is also no way you can get out of a flood with a drought, you can move to another place but with a flood all of your cars and stuff would be gone. When you have fast waters it is really dangerous and 18 inches of water will float a car when 24 inches of water will carry cars and more away.
Drought conditions also have a bad frequency of affecting wildlife animals and especially plants. Trees and plants die from loss of precipitation and the humans can’t give them it because they need it. So when you are losing all these plants, the plants take in carbon dioxide and release oxygen so your air is polluted with carbon dioxide. There is also a theory that if you have a drought there is a higher chance of insect invasion and a higher chance of disease.
This is why I think that droughts are way more severe than floods. The three topics that I think stood out the most are that there is a higher chance of disease, my second reason is that droughts cause bad health issues and affect your safety rate. My third and final reason is that droughts can soon lead to tornadoes and hurricanes.